In the week leading up to December’s holiday break, our Grade 8 students were fully immersed in project-based learning. The students were tasked with creating a film to raise awareness for a local water issue as they worked towards attaining the Wisdom pillar of their Global Leadership Program “pillar pursuits.”

With topics ranging from banning microbeads to the consumption of water, from the use of plastic water bottles to access to clean water, students collaborated in groups as they moved through a series of workshops that prepared them for their final project, a film to be submitted to the Water Docs Film Festival in Toronto.

“We started them off with a process of integrative thinking, where they look at the problem and then have them break it down into two opposing models, finding the pros of both,” says Chris Coyne, the Middle School science teacher leading this initiative. “They need to ask—is there a middle ground or a solution that best encompasses both sides—that they can go forward with.”

Although it’s the third year Grade 8s have participated in this project, the Middle School faculty team made some changes this year to create a stronger connection between this interdisciplinary undertaking and the curriculum. For instance, in math students worked on data management projects where they researched the impact of water on an issue and then presented their data on a scatter plot or histogram. Students learned how to storyboard so that they would be better prepared for creating their films and how they may look. Faculty also introduced a workshop to assist students in developing their French language interview skills so that the films contained a French component—something few schools in the festival have done.

“This project was a massive undertaking for Grade 8 students—they were researching, they were finding answers, they were trying to solve problems that adults might not have answers to yet. But overall they seemed to get really involved in it and they liked the activities that we did, the workshops we had planned for them—you could really see the engagement of the students throughout,” says Coyne.

Julia Hunt, Director of Global Leadership says projects like ‘Water Docs’ are “incredible opportunities for our students to address an important topic from multiple disciplines, and really delve into both the problem and potential solutions. Our Grade 8s are not only considering solutions, they are taking action, which will prepare them to be changemakers in today’s society.” In early March, the students’ work will be submitted the Water Docs Film Festival which takes place in Toronto in April. 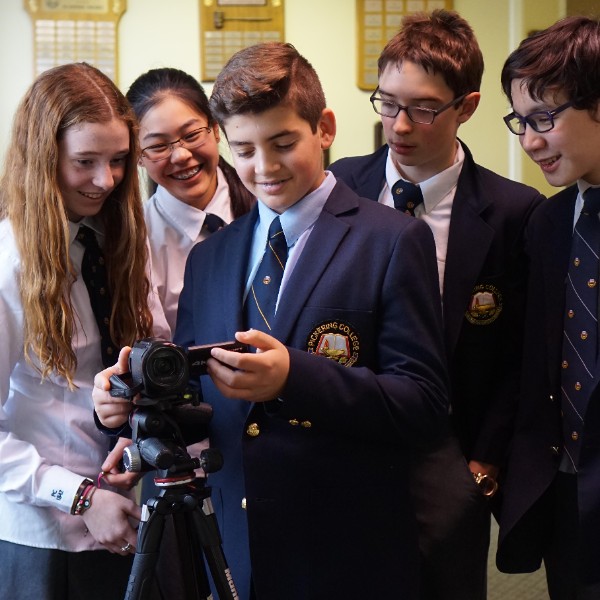 “This experience was incredible because we got to think creatively about different solutions and perspectives we may take on our local water issue. Throughout this project I’ve learned that teamwork is such a huge skill when it comes to big group projects. My favorite part was getting to make a change in our local community.”

“I loved the creative aspects of the project and the focus on being innovative in delivering our message. It allowed me to really appreciate the creativity of my classmates and the feeling of knowing we were being very productive and really working well together. It was exciting to build on each other’s ideas and really get our creative juices flowing.”

“When we started working, I realized that it was going to be fun but also challenging. Our group’s favorite part was filming and getting the finishing touches together. My favourite part was communicating with other organizations to work with us.”