Pickering College leads the way among independent schools as the only one in Ontario to produce its own food using Urban CultivatorTM technology.

Pickering College has always been committed to serving students fresh, healthy, locally-grown food. That’s why the team in Food Services took that commitment to healthy eating a step further by introducing an Urban CultivatorTM in the fall.

The gleaming white double-door apparatus is a showpiece in the school’s servery. Full with verdant organic greens, the indoor hydroponic growing system allows a commercial kitchen like ours to produce healthy sprouts, microgreens and fresh herbs year-round.

“The urban cultivator’s philosophy is ‘from farm to fork in ten seconds or less,’” says Julie Axford, Director of Food Services at Pickering College. “We know that local food tastes better because it is so fresh.” The purchase of the cultivator was assisted by a grant provided by the winner of the Farmer Environmental Stewardship Award last year, an award provided by a current family in recognition of student environmental leadership.

Axford says Pickering College is truly leading the way among independent schools as it is the only one in Ontario to have made this kind of investment in producing its own food.

Locally-produced food leaves a much smaller environmental footprint, it’s safer because it has passed through fewer hands and time zones and it supports the local economy—It’s also more nutritious since fresh produce loses valuable minerals and nutrients the longer it is in transit.

“Being able to grow our own greens and herbs is really in keeping with our practice of making meals as nutritious as possible—Whether it’s changing our menus so we’re taking advantage of seasonal choices or purchasing ingredients from local suppliers,” Axford says. “Our kitchen uses the veggies and herbs grown by Pickering’s students in the raised garden beds behind the Dining Hall and this additional investment will mean we are able to continue producing our own food right here, even during the winter months.” 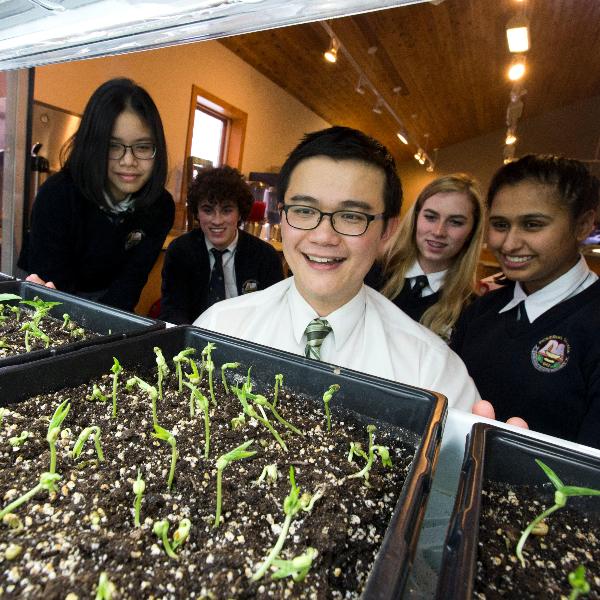 PC students are enjoying fresh local herbs and microgreens year-round. Thanks to investment in Urban CultivatorTM, we are able to produce such crops as: